There is a whole class of cement that was very popular in the days before the invention and manufacture of Portland cement quickly replaced its use. Generally classified as magnesium-based cement, this material was used in historic times, dating back to ancient times in Europe, India, and China, among other countries. The Great Wall of China and many of the stupas in India, still standing today, were all made with magnesium-based cements. It is unfortunate that Portland cement has replaced the use of these magnesium products because there are many ways in which they are superior.

Primary among these is the fact that they require much less energy to produce and do not off-gas as much CO2 as Portland cement in their manufacture. The phosphates typically used to combine with the magnesium can even be sourced from animal wastes or fermented plants. Add to this fact that these cements develop considerably greater compressive and tension strengths compared to Portland cement, and you wonder why they are not more commonly used these days. The promotion and proliferation of Portland cement occurred when energy was cheap and health concerns of the public were simply not an issue.

Another advantage of Magnesium-based cements are that they have a natural affinity for cellulose materials, such as plant fibers or wood chips; Portland cement repels cellulose. So you can actually use wood chips as an aggregate to achieve lighter weight and more insulative products. Magnesium oxide when combined with clay and cellulose creates cements that breathe water vapor; they never rot because they always expel moisture. MgO cements do not conduct electricity, nor heat and cold, and have been used for flooring for radar stations and hospital operating rooms.

While a bag of Magnesium cement might cost 2 to 3 times the same weight of Portland cement, that doesn't mean that it is more costly to use. This is because with the attributes of the MgO cement, you can create very strong thin-shelled structures using a variety of lightweight and inexpensive fibers; something that ordinary Portland could never do. 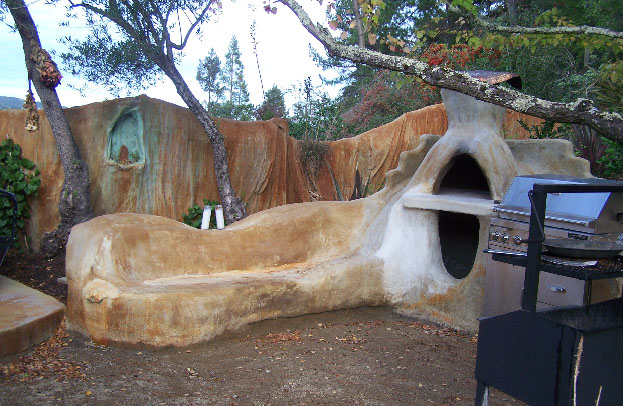 An example of this is what Michael Collins, an artist/visionary/eco-builder, has been creating with magnesium cements. Since these cements completely cure within hours of application, amazing sculptural forms can be created almost spontaneously and become usable within a day. Michael points out that a team of workers could build a small house in one day, and people could be living in it the next. This opens up a huge opportunity for emergency shelters around the world to be constructed almost immediately. There is no off-gassing nor toxic residue to deal with; in fact the material seems to have health-giving benefits for the human body because of its electrical properties. 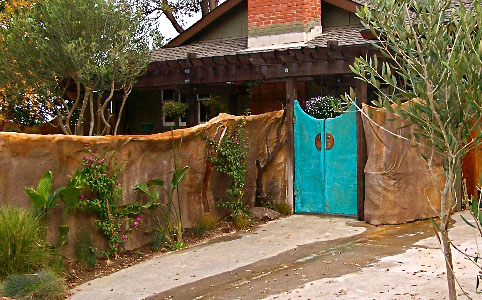 Michael works as a landscape artist much of his time, and he built this entire wall and gate with magnesium cement. You can tell how he used a fabric, like burlap, dipped in the cement and then draped it over an armature to create this unique wall. 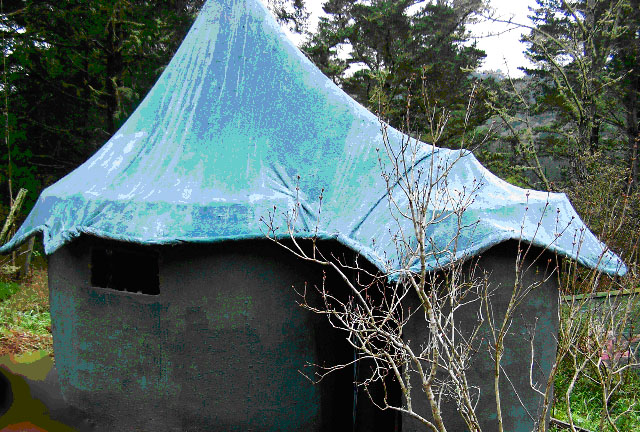 Magnesium cement has great potential for creating thin-shelled roofs over other kinds of materials. An example of this can be seen above, where this tensile fabric roof structure was created almost instantaneously. Michael Collins says that this sort of roof could be made with a hollow space between two similar layers, which would provide an insulating barrier.

There are a number of commercial products that have been developed using magnesium cement as the basis. In 1996, the Argonne National Laboratory developed a material they called "Ceramicrete," in an attempt to find a way to safely encase nuclear waste. Ceramicrete can prevent pollutants from leaking into the environment apparently.

The Casa Grande Company took the ceramicrete concept and developed what they call Grancrete. According to this company they have found a way to build cheap, sturdy homes in one day by spraying a quick-drying ceramic onto flimsy frames such as styrofoam. Grancrete dries to form a light, hard surface which can be used to create a dwelling. Grancrete is stronger than concrete, is fire resistant and withstands both tropical and below-freezing temperatures. Grancrete is made from a mix of locally available chemicals: sand or sandy soil, ash, magnesium oxide and potassium phosphate, which is a biodegradable element in fertilizer.

The Bindan Company in Chicago makes a variety of products with magnesium oxide. Just add water and they are ready to go. According to the Bindan Company website, “Our phosphate bonded products typically have faster setting times, higher strength and better adhesive characteristics than products based upon Portland Cement. There is no off-gassing of harmful fumes. Our products are fire proof and are suitable for use both indoors and outdoors.

CERATECHs family of products have been engineered for both the permanent repair of existing concrete or for structural concrete for roads and bridges, aviation runways, industrial infrastructure, boat ramps, building foundations and any other new construction application where rapid early strength gains are required. These products are activated by the addition of water.

GigaCrete offers a variety of plaster materials for both interior and exterior applications, with all of the benefits of other magnesium cements. An MgO cement fiber board is also available.

AirKrete is a natural MgO mineral based blown-in insulation that combines all the advantages of MgO cement with aeration and spray in place convenience. It is non-toxic, resists mold growth even in high humidity, is fire proof and sound proof, re-absorbs CO2 as it cures, has an R-value of 3.9 per inch, does not shrink as it dries.

Magnesium oxide is also available in bags from several other sources. These recipes require either liquid fertilizer or special brine “reactors” to harden into concrete and are especially useful for binding non load-bearing straw/clay and woodchip/clay mixes for building construction. 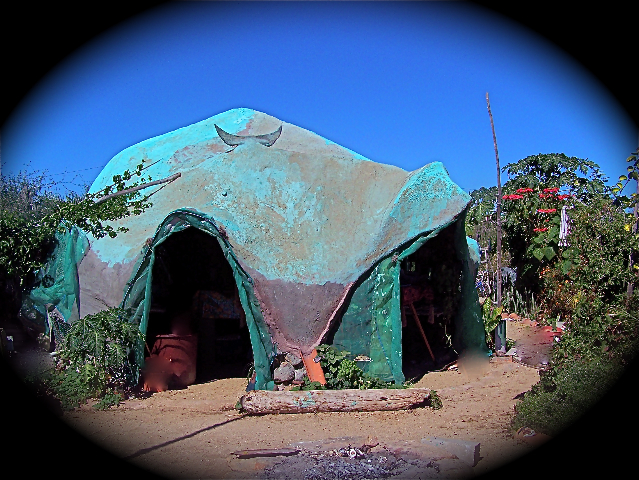 I asked Michael Collins how much dry MgO/Phosphate cement would be needed to make a small two-room house, and he thought that it could be done with three 50 lb. bags, totaling perhaps $150 in materials. He has described one simple method of building this way posted on his questions and answers column. If you have any questions about the possibilities of building with this amazing material, Michael is happy to answer them for you. Just go to the Ask the Experts page.