The Lost Art of Pantries and Root Cellars

In this age of electric refrigeration, the use of cool storage pantries and root cellars has all but faded into oblivion. This is unfortunate, since they have great value for many reasons. There is only so much that can be put into a refrigerator, and the bigger the fridge, the more it costs to keep it cool. With pantries and root cellars, the storage potential is much greater and the cool atmosphere is free and non-polluting.

There is a distinction between a root cellar and a cool pantry: humidity. A true root cellar should be kept fairly moist in order to best preserve the crops that are stored there, whereas a pantry needs to be much dryer to avoid spoilage. Root cellars are limited in their use, but a pantry can store practically anything. 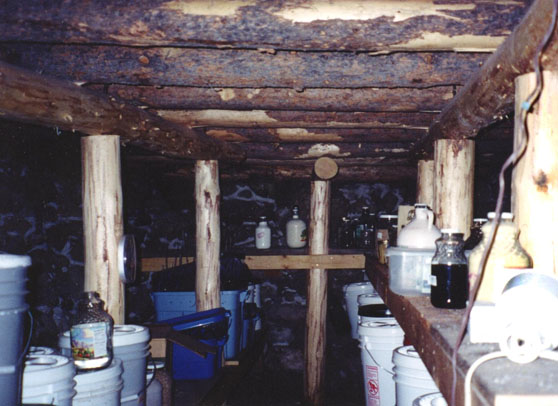 Before the days of refrigeration, root cellars and ice boxes were about the only way to keep certain crops fresh after harvest. Root cellars were usually separate from the house and dug into the ground to take advantage of the cool, stable temperature beneath the surface.

Depending on how often the produce needs to be accessed, there are differing strategies for creating the space. The simplest concept is to just bury a garbage can in the ground, with the lid protruding above, then digging a trench around the can so that straw can be thrown on top and then plastic sheeting placed over it all with rocks to hold it down. Damp burlap or sand can be enclosed with the produce to maintain the proper humidity. Obviously it takes some work to get at the produce, but this method will store some items, especially over the winter.

A more elaborate and convenient root cellar will have a door for entry, sometimes placed flat on the ground or at an angle, but probably the best arrangement is with a vertical, insulated door. If the root cellar itself is completely underground (which it really needs to be to take advantage of the cool earth), then there would be steps that descend to the door, or a covered entrance with steps after the door. Another possibility is digging into a hillside. Depending on the stability of the soil, the sides of the excavation might either be left unfinished or lined with materials to create a retaining wall. The roof needs to be supported by some fairly massive timbers to support up to two feet of dirt placed on top. Care should be taken to avoid contact between the dirt and any wood used. Sheets of heavy polyethylene can be used to good advantage to protect the wood. Usually if the floor is left as natural earth, or just has a layer of gravel on it, the humidity will remain high enough to store most produce.

It is a good idea to provide some ventilation, with a high outlet vent and a low inlet vent. These could be closed during really cold spells to assure that nothing freezes, but having some air movement keeps the space fresh and allows off-gassing of the produce to occur without harm. Apples will give off ethylene gas which can cause potatoes to sprout prematurely and make carrots go bitter, so store the apples near the outlet vent. 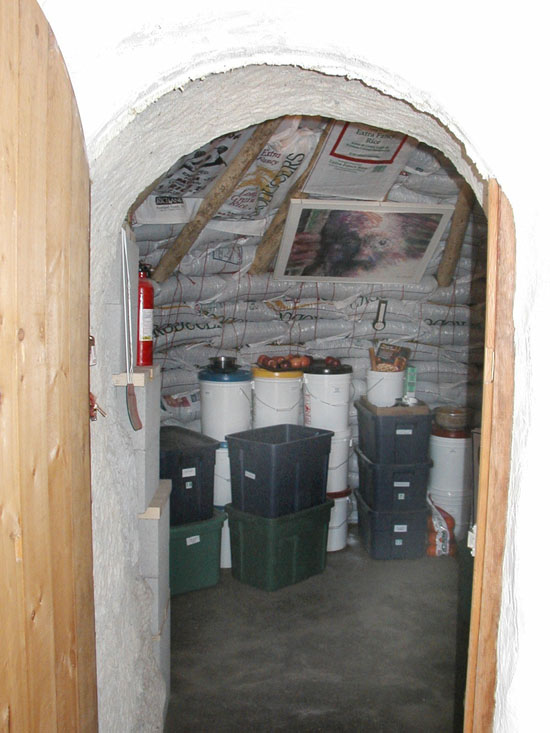 Unless you have an abundance of the produce mentioned above, a root cellar may not be so useful for you. On the other hand, a cool pantry would be useful for almost anybody. We built one as an extension of our house and would now feel deprived without it. We decided to make a rather large one (about 100 square feet), and I'm really glad we did. This allows us to keep lots of staples on hand, which diminishes our need to make that trip out to stock up on food, and it's a great feeling to know that we could survive all manner of problems and help our neighbors as well.

Our pantry is situated right next to our kitchen, which makes it especially useful. Most food items will last much longer if kept cool and dry, so we have grains, beans, nuts, dried produce, dry milk, canned goods, pet food, wine, etc., much of it in 5-gallon containers. There is lots of room in there to store empty bottles and miscellaneous kitchen wares that we don't need frequently. We don't have a separate root cellar, so we also store fruit, potatoes, garlic and onions, yams and squash in there. These items definitely last much longer than they would at room temperature in our kitchen. 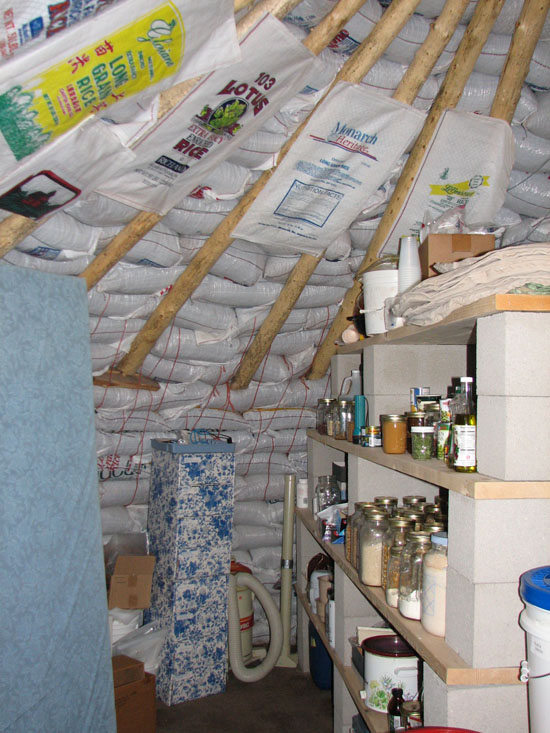 This pantry is dug about five feet into the ground on the north side of our house. It is semi-circular in shape, with sloping walls made of polypropylene bags filled with sand at the lower level and crushed volcanic rock above that. The conical roof is partially supported with a pole framework because the pitch is too shallow for the bags to be self-supporting. The whole thing is just covered with several layers of plastic sheeting and then covered entirely with dirt. There is an inlet air vent on one side and an outlet vent at the very top. The floor is adobe poured over plastic sheeting, so the atmosphere is fairly dry. After quite a few afternoon rains, the humidity in there is only 64%. It has never leaked. The temperature ranges from a low of about 36 degrees F. (in the dead of winter) to a high of about 65 degrees F. in the heat of the summer. If it were dug deeper into the ground this spread would be less.

Another interesting approach to building a pantry is to bury a section of a large culvert pipe. One man took an eight feet diameter by fifty feet long culvert, welded the ends closed, and created a hatch for entry. The air vents and entry were camouflaged, so he had a secret hideaway/storage unit. This same concept could provide a completely buried pantry that is accessible from inside a house.

Many house designs would not easily accommodate a buried pantry. Another strategy for keeping a room cool is to locate it on the north side of the house, and have substantial air vents that are opened only at night during the warmer seasons. This requires a little more attention to maintain a cool temperature, but makes it possible to retrofit an existing house with a nice cool pantry. The room should be well insulated to keep it from warming up too much during the day.

The idea of having a large cool storage room next to the kitchen makes so much sense to me that I think all houses should be designed this way. This facility uses no energy to keep things cool and promotes a lifestyle of fewer miles driven, along with a feeling of abundance and security. What a winning combination!