Yurts: Living in the Round 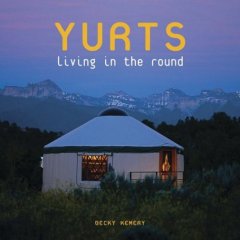 Ever since I first heard that Becky Kemery was writing a book about Yurts I have been looking forward to having it in my hands. The wait has definitely been worth it, now that I can see how fully realized her idea has become. Yurts: Living in the Round was published in 2006 by Gibbs Smith, and is the definitive source of information about anything to do with yurts. Not only that, it is also a fine piece of art in its own right; nearly every page is graced with carefully laid out color photos and drawings. Becky's writing is both clear and well researched.

Becky writes, "Most yurts are portable, tent-like structures. They have circular lattice walls (reminiscent of baby gates tied together) and a cone-shaped roof supported by rafters that meet in a center ring. The outer fabric shell of the yurt can be made of felted wool, coated canvas, or a modern architectural fabric. An ever-increasing number of wooden structures are also called yurts. What defines them as yurts and not just round houses? The Answer lies in the yurt's uncommon roof structure."

"The yurt roof incorporates a unique architectural design. Roof struts meet in a center ring, producing inward and downward pressure. This center ring holds the rafters an a state of compression. Where the struts meet the wall at the perimeter, a natural outward thrust occurs. A band (of rope, woven cloth, or wire cable) a the top of the wall holds the wall and roof poles in tension against this outward pressure. Because of this...long roof spans are possible without any internal support system (like posts, trusses, or beams). This gives the yurt an uncommon feeling of spaciousness and uplift. the roof design also creates an incredibly strong and resilient structure that is uniquely equipped to withstand earthquakes, strong winds, and heavy snow loads."

The historical evolution of the modern yurt from its origins with the nomadic Central Asian tribes is carefully outlined. Both the Mongolian Ger and the Turkic Uy are the forerunners of what we now call the yurt. How these tribal folks traditionally make and decorate their portable homes is both fascinating and colorful. This process is generally a group effort and often involves painstakingly felting the wool to make the covering. The traditional pattern of living within this circular space is surprisingly similar to Native American traditional use of space within a hogan, with various family members and guests having their appropriate places.

One of the early modern adaptations of the traditional yurt design was Bill Copperwaite's "tapered wall yurt." These are wooden structures that incorporate the same roof design, but modify the vertical walls to incline outward, giving them a distinctly oriental flare. Bill has been exploring these interesting shapes since the early 1960's, and has come up with quite a variety of forms, including some with concentric tiers of yurts within yurts. Some of them have scalloped butterfly-like roofs; others have gothic arches that surround the perimeter.

The modern fabric yurt is more like its nomadic predecessor, in most ways, except that modern canvas or synthetic fabric replaces the felted wool. Becky chronicles how various people have adapted the original designs to suit modern needs in a variety of climates. Many of the new yurts have central plastic dome skylights and windows that let in lots of light, making them much more open and airy than the darker, womb-like nomadic yurts.

Many of the folks who have experimented with building their own yurts have gone on to make a business of supplying yurt kits for the general public. Becky suggests how to locate and evaluate these yurt companies, and describes various ways that yurts can be adapted for personal needs, such having a bathroom, porch, heater, etc. She even addresses the issues of financing and insuring yurts, and dealing with building code officials.

Another modern adaptation to the traditional yurt is called the "frame panel" yurt. These are much more permanent dwellings than their fabric cousins, and can appear as very solid indeed. They are often prefabricated off-site and shipped to the site for erection. Becky interviewed various people who have lived in these unique homes and shares many insights that could help others who do the same.

The chapter titled "Living in the Round" philosophically evaluates the merits of doing this. Becky writes, "The flexible open space of a yurt is an interior design canvas waiting for the creative expression of each yurt inhabitant. What remains constant is the welcoming embrace of the space, the interaction between inner and outer worlds, and the roof structure that lifts our vision skyward. The yurt also has an inherent ability to bring people together into a circle, which naturally engenders connection and cooperation."

The final portion of the book has several appendices that explore building codes, platform construction, and wood stove installation. There is also an extensive resource guide here for yurt companies, yurt plans, and other media. Becky's website about yurts, http://www.yurtinfo.org, is another resource providing additional information.

I heartily recommend this book to anyone interested in simple, sustainable living, enduring vernacular architecture, or the possibilities inherent in living in the round.