Papercrete is a fairly new ingredient in the natural building world. It is basically re-pulped paper fiber with Portland cement or clay and/or other dirt added. When cement is added, this material is not as "green" as would be ideal, but the relatively small amount of cement is perhaps a reasonable tradeoff for what papercrete can offer. I have had a fair amount of experience with this stuff, and I would say that is has some remarkable properties. Care must be taken to utilize it properly, or you could be courting disaster. I am acquainted with both Eric Patterson and Mike McCain, who independently "invented" papercrete (they called it "padobe" and "fibrous cement") and they have both contributed considerably to the machinery to make it and the ways of using it for building.

The paper to be used can come from a variety of sources and is usually free. I've used newspaper, junk mail, magazines, books, etc., which I get from our local dump or from the waste bin at our post office. Depending on the type of mixer that is used to make pulp out of it, the paper might be soaked in water beforehand or not. My first mixer used a small electric motor mounted directly to a shaft suspended in a plastic 55 gallon drum where the mixing took place. After a year of making small batches with this, I graduated to a "tow mixer" designed by Mike McCain, which is basically a trailer made from the rear end of a car. With this mixer (which I towed behind a Volvo station wagon) I could make three or four wheel barrows full of thick papercrete in about twenty minutes. I simply filled the tank nearly full of water, added about one wheel barrow full of dry paper, one sack of Portland cement, and perhaps some sand, depending on how I planned to use the mix. Then I drove slowly around the block, backed over a drain box with 1/8 inch mesh on the bottom, and dumped the slurry into the box via a drain hole in the bottom of the tank. After about a half hour of draining the excess water from the slurry, the papercrete is like soft, workable clay, but not nearly as messy. This is the material that I used to plaster both the inside and outside of my earthbag house.

The slurry can just as easily be pumped or dumped into forms to set up that way. Eric Patterson makes adobe brick sized blocks of papercrete to build with, and mortars them together with a slurry of the same stuff. Mike McCain prefers to either pump the slurry into slip forms or make larger blocks for building. The addition of mineral material (sand, adobe, etc.) has the advantage of minimizing the shrinkage as it cures, making the final product more durable and fire proof, at the expense of slightly less insulating value and more weight.

Cured papercrete acts like a sponge unless it is coated with something to stop the entry of water. In my earthbag/papercrete house I allowed the papercrete to breath fully, so that it absorbed an enormous amount of water when it rained. This was not a problem because there was nothing in the wall that would be damaged by water, even if it got past the papercrete layer, which it rarely or never did.

Other properties of papercrete are:
1) It is dimensionally very stable both through the process of taking in moisture and drying out and in a wide range of temperatures.
2) It will hold fasteners to some extent, especially screws, without cracking.
3) It is highly insulating (about R-2 1/2 per inch).
4) It does not support flames, but will smolder for days if it does catch fire. The more cement and mineral material that is added to the mix, the more fire proof it becomes.
5) It will support molds if it remains warm and moist for too long.
6) It will wick moisture from the ground into the wall if buried in dirt.
7) It becomes soft and will deteriorate if kept damp (especially underground) for too long.
8) It resists rodent and insect infestation.
9) It will erode over time when exposed to the elements, and for this reason the earthabg/papercrete house was eventually replastered with stucco.

Paper adobe is similar to papercrete, but instead of cement used to bind the paper fiber into a solid, clay is used as the binder. This can work well if the material is kept absolutely dry; otherwise it will become soft and could deform.

ARTICLE:
The Truth About Papercrete

The ratio of materials

Building with Bags: How We Made Our Experimental Earthbag/Papercrete House 1 1/2 hr. DVD produced by Kelly Hart.We wanted to build an environmentally sensitive and aesthetically pleasing home at a moderate price. We chose to create earthbag domes covered with papercrete (recycled paper combined with cement and sand). This honest DVD documents details of the construction, insights gained, and the ups and downs (literally!) of the building process. Several other earthbag homes are also shown. 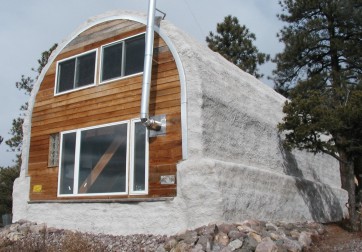 This Carriage House was initially designed to create garage and shop space, as well as office and storage space for the designer's personal use. There is potentially about 900 s.f. of usable floor area on two stories. It is a hybrid design, utilizing earthbags plastered with papercrete, a steel prefabricated Quonset-style vault, concrete floor, and wood-framed end walls. Since the steel vault is completely covered with insulating earthbags, the building is very well insulated, and comfortable year-round. This concept could be converted to residential use, with the addition of kitchen and bathroom functions, and the steel interior finish could be covered with scored sheetrock, tongue & grooved wood, or even cloth. This is rather inexpensive way to create substantial shelter. This design is based on a fairly small (16' X 34') steel building, but these structures are available in a wide range of widths ( up to sizes fit for aircraft hangers), and the lengths can be indefinite, since it is just a matter of adding more arched sections to lengthen the building. 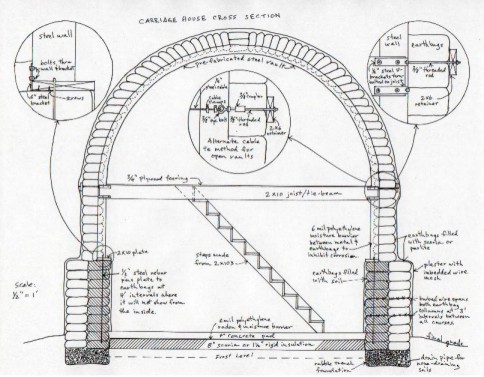 This cross section shows the hybrid nature of this design. In order to gain height, the steel shell is erected on top of an earthbag stem wall, and then the earthbags continue on up over the building. The double columns of the stem wall provides thermal mass on the inside and insulation on the outside. An insulated concrete pad is poured for the shop/garage floor. The second floor joists and tie beams are essential elements of the design, since they resist deformation of the vault from all of the weight on it.

livinginpaper.com I heartily recommend this site compiled by video producer Barry Fuller; it outlines in great detail his research and thought about papercrete as a building material.

makepapercrete.com some good basic nformation about papercrete and how to make it and a tow mixer.

papercreters.blogspot.com is a blog devoted to all things papercrete.

evesgarden.org Eve's Garden Organic B&B and Ecology Resource Center has done some wonderful building with papercrete and has a page about papercrete as a resource.

starship-enterprises.net Several pages about papercrete, with lots of good pictures, including a look at a large papercrete dome project with lots of slow-loading pictures, but worth the wait. A papercrete list forum is operated from here.

youtube.com There are several short videos posted at Youtube on papercrete.

hybridadobe.com Philip Mirkin's site explains how he makes "hybrid adobe," a mix of papercrete and soil.

MasonGreenstar.com This Texas company is gearing up to manufacture commercial "blox" of papercrete.

groups.yahoo.com is a forum devoted to discussing papercrete.

mortarsprayer.com has a page about papercrete with several embedded videos and a photogallery.

hubpages.com Building a Home from Papercrete.