This describes a whole class of systems that employ modular insulated forms into which rebar is threaded and concrete is poured to created an isulated monolithic wall structure. Contractors love these systems because the forms are generally very fast and easy to assemble, the concrete can be pumped into the forms virtually any time of the year because the cement is insulated as is cures, and the result is a very strong, durable, insect and fire proof, and fairly well-insulated wall. This method of building is definitely gaining popularity, judging by the multitude of systems that are on the market.

The various modules are assembled more or less like lego toys, where one units locks into the others around it in some way. Mostly they are made out of Expanded Polystyrene (EPS) reinforced with steel or plastic ties. Some are made of EPS that has been recycled and then glued back together with cement. Some of them are made out of mineralized sawdust or wood chips bound with cement. Most of these are in block form, but some are available as panels or planks. Many of them are billed as "green" or environmentally friendly, either because of the recycled content or because of the thermal properties of the wall. They definitely reduce the use of milled lumber in building a house, which is good.

My main objection to these approaches to building, besides the fact that they utilize massive amounts of manufactured insulation, steel and cement, is that the structure of the wall itself does not provide optimal placement of insulation and thermal mass. Ideally you want most of the thermal mass of the building to be on the inside where it can absorb the heat provided, and stabilize the interior temperature. This mass should then be well insulated from the outside air. With most ICF systems the mass (concrete and steel) is embedded within the insulation in the finished wall, where it helps stabilize the fluctuations of temperature somewhat, but also does bleed energy to the outside. A couple of inches of Styrofoam is not sufficient insulation for the thermal mass from the outside, and the insulation of the inside prevents the mass from doing its job efficiently. Reports of the the overall insulation of these ICF systems vary widely, but typical R values are right around R-20. When compared to the R-40 attained with straw bale or earthbag/volcanic rock walls, this is not so great. I think the greatest value of these ICF systems might be in creating insulated foundations or stem walls for other methods of building that require such foundations.

This unique wall system, manufactured by allwallsystem. CFIs are forms for poured concrete walls that stay in place as a permanent part of the wall assembly. The forms consist of concrete board on the inside and out held together by galvanized steel studs every 7.25 inches with 4" of rigid insulating material held by 1" spacers in the center. The forms have window and door openings pre-cut as well as electrical conduit and boxes installed. Red iron steel (rebar) runs vertically from every slab every 4' and horizontally in the tie beam area, then the form is braced and poured full of concrete. The poured concrete creates a "post and beam system" including a continuous tie beam along the top, as well as walls 1" thick solid concrete next to each concrete board surface.

Once the forms are poured, the walls are ready for conventional drywall finishing on the inside, and any conventional finish such as stucco or siding. Electrical conduit boxes are already in place for the electrician as well. This unique combination of steel studs, cement board, rebar and poured concrete creates a wall of great strength, reasonable insulation (R- 20), low air infiltration and good thermal mass. 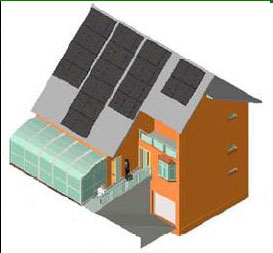 Rooms include: Master bedroom, bath, second bedroom , sundeck, gallery/hall, and open lofted space that could be converted to an additional room.

What makes this EcoHouse design hybrid, is the fact that both active and passive solar systems are employed. 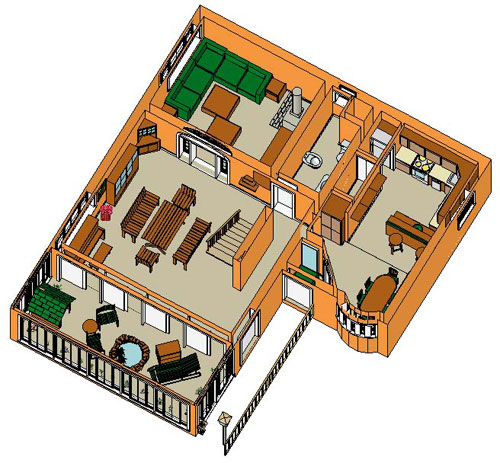 icfhomes.com Insulated Concrete Forms Builders' Network.
concretenetwork.com lots of information and resouces for building with concrete.
faswall.com common in Europe since the 1940's, made with 85% mineralized wood chips and 15% cement or cement and fly ash.
nexcembuild.com recycled waste wood that is neutralized and mineralized, and then bonded together with Portland cement.
rastra.com made with recycled styrofoam and cement.
cempo.com recycled EPS and cement
tfsystem.com EPS tied with galvanized steel.
reddiform.com EPS.
BautexSystems.com EPS