Cast Earth is the invention of Harris Lowenhaupt of Phoenix, Arizona. He grew up in an adobe home in the Southwest and loved the feeling of living in an earthen home. As a chemist he became fascinated with the idea of making earthen homes castable. Instead of making individual adobe blocks for building, or intensively ramming earth into forms little by little, he wanted to be able to just pour the plastic earthen material into a form and have it set up very quickly, within a day! 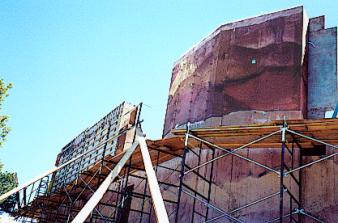 He started experimenting with adding calcined gypsum (plaster of paris) to earth, and found that a fairly small percentage (about 15%) of the gypsum would make a very solid block. This worked fine for very small projects, but for larger walls it set up way too quickly (within minutes) to be practical. So he looked for retarding agents that could be added to the mix to slow down the setup time. Standard retarding agents would only expand the time frame by a few more minutes, so he needed to look beyond conventional practice. 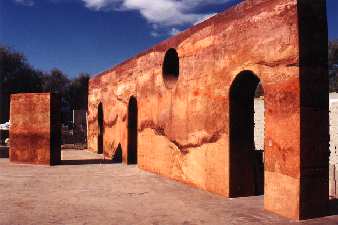 In the early 1990's, Harris came up with a promising mix that allowed about two hours of working time and he build his first prototype building using this method in 1995. Since then he has refined the process to allow setup times of over eight hours, which makes possible very large scale building projects.

Cast Earth has some very interesting and useful properties. The compressive strength is about the same as adobe or rammed earth, sufficient to support most conventional building loads. The tensile strength, however, is several times greater than these materials, which makes it much stronger and perhaps more durable. Unlike adobe, Cast Earth does not shrink as it cures (it actually expands slightly), making it much less likely to crack. Like other earthen materials, it will absorb moisture, but it retains enough strength, even when saturated, to maintain its structural integrity. It can be rendered moisture resistant by the use of additives to the original mix, or by spraying the finished product with a silicon spray. 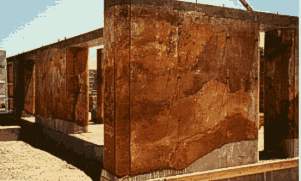 Another major consideration is that Cast Earth can be made from a wide variety of types of soil. Unlike Adobe, rammed earth, and cob (which must have a certain ratio of clay to larger aggregate soil), Cast Earth does not require the binding capacity of clay. It can utilize soil with some clay in it, but this is not necessary. And unlike cement, which cannot tolerate much fine material like clay, Cast Earth can easily incorporate it into the matrix it creates. 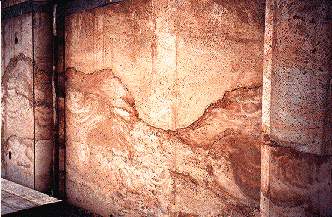 I think that one of the most significant aspects of this new material is aesthetic; the completely natural, variegated appearance of the finished wall that has not otherwise been covered is stunning. It resembles cut sandstone slabs, with random patterns of striations that swirl throughout the surface. This fact alone makes it worth considering for your building project. 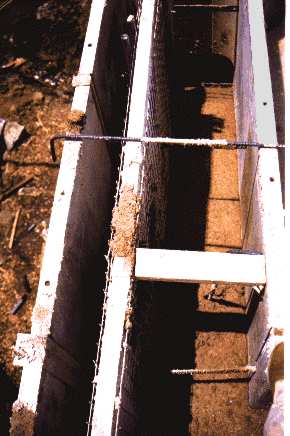 The thermal properties of cast earth are similar to other earthen materials: it makes for excellent thermal mass, but has little value as an insulator, except that because the walls are generally quite thick, and it takes many hours for atmospheric temperatures to approach the interior portions of the wall. For this reason it would be best to provide some insulation in the wall system where extremes of temperature are found. This can be accomplished with exterior insulation, as would be done with rammed earth, or it is also possible to imbed the insulation within the wall at the time of pouring, as shown at the left.

The fact that the process for making Cast Earth has a patent pending might discourage some folks from getting involved. I can understand this; I prefer to work with materials and processes that have no strings attached. However, in this case, Harris is willing to provide training to those who are are really interested, and the nature of the process itself demands the use of a lot of heavy, mechanized equipment which is best handled by people who are familiar with the process. There are currently several contractors who are licensed to do this work, and over time there will be more.

All of the photos shown here are courtesy of Cast Earth.

Frankel Salisbury Home this page is very image intensive and takes forever to load, but it shows this architect's home, which uses quite a bit of Cast Earth, under construction.

A variation of Cast Earth that has been around since cement was first formulated is Soil Cement. This is really just ordinary concrete with the sand/gravel aggregate replaced by soil. This especially works well with rather sandy soil, but will also work with other soil types. The heavier soils with more clay content will probably require more portland cement. Soil cement has been used to form walls, make floors, pave roads, stabilize river banks, etc.