Why build and live in a small house? First of all, it is more convenient to have what you need nearby. Life proceeds smoothly when the things you need are close at hand. Also, I might point out that limited space forces you to select only those things that you really need to live with, helping to keep clutter out of your life.

Another fairly obvious point is that a smaller house costs less to build and maintain. Housing represents the greatest expense that most of us face in this life. It is common to take on huge debt to pay for a house, which multiplies the cost even further, and places us in a kind of servitude to both the creditors and the house. Rob Roy, in his book "Mortgage Free!," points out that the word mortgage comes from old French, and means "death pledge." In it he describes many ways to build without debt. If you are able to own your house free and clear, all those years of your life that would have gone into paying off the debt can be utilized to positively affect your life and the world.

Obviously, the smaller the house, the fewer resources are consumed in creating it. Since the use of many building materials has a negative impact on our environment, keeping it small lessens the impact. Then there is the environmental cost of heating and cooling a house to consider. The smaller the house, the less this cost will be. Burning fossil fuels, either directly (such as propane heating) or indirectly (such as heating or cooling electrically), consumes these finite resources and contributes to carbon dioxide pollution. It is much easier and more effective to design a solar heated house that is small.

Another impact to consider is aesthetic. Does the house fit in with the landscape? A large, imposing edifice may seem out of scale with the surrounding land, whereas a small abode is more likely to fit in nicely. 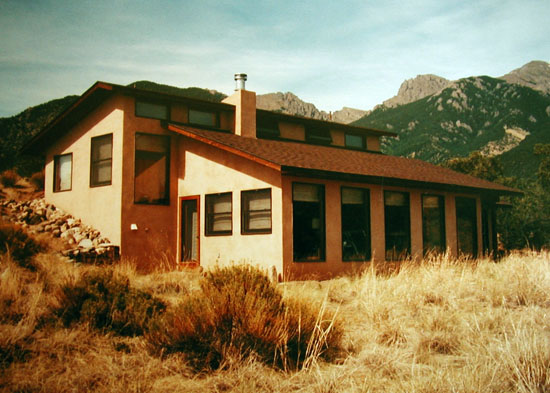 To illustrate some of these concepts, Suzanne Frazier has graciously allowed me to use her home as a model "small house." Built in 1994 by "Cut No Slack" construction of Salida, Colorado, Suzanne's house is more or less conventional in materials used (wood framed, etc.). She wanted it to conform to the Uniform Building Code so that she would be sure of its integrity as a house over time.

Suzanne describes her house as "Zen Adobe" in style. She wanted as few moving parts as possible. She really liked the simplicity of design employed in the hermitages at the Carmelite Monastery, so she got together with the monk who designed those and one of the staff at Cut No Slack to evolve her personal design. In fact she calls her house an "oversized hermitage," expanded from the original 400 square feet to 924 square feet (without the garage.) 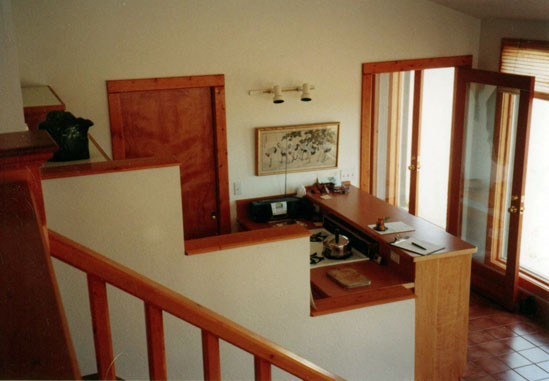 The main entrance to the house is through a small "mud room" that serves as an air lock for the rest of the house. The next door will let you into a large space on the main level that serves many functions. Immediately on your right is the kitchen space that is defined by back to back counters and a stepped wall along the central flight of steps. The kitchen is diminutive, but well organized (organization is key to living in any small space.) Since it is not visually cut off from the rest of the house, it does not feel cramped. There is a door in the back wall of the kitchen that leads to a pantry, with shelves of provisions and the refrigerator (to muffle its sound from the rest of the house.) Also within the pantry is a unique feature that Suzanne is proud of: a little half door into the garage, to allow supplies to be deposited directly there from the car. Above the pantry is a little cubby hole/loft, accessible from upstairs, which is actually where Suzanne sleeps.

On the other side of the central stairs is the living/dining area. Again it is cozy, but not claustrophobic because of all the space and light around it. The space seems to flow in all directions. With the passive solar design, the bank of windows running along the south and west walls flood the area with light. Bamboo and paper curtains soften the light where desired. Suzanne plans to replace these curtains with truly insulating ones soon, but for the last six years she has managed to keep warm enough without the glass being insulated. In fact, she said that for two winters she never fired up the large wood stove next to the stairs. I think she has a bit of the monk's asceticism in her. The floor of the entire first level is tiled to serve as a heat sink for the solar design.

The half-flight of stairs lead to a balcony/hallway, which accesses the bathroom/laundry and store room, and the two bedrooms, neither of which does she use as a bedroom. The largest second level room serves as Suzanne's art studio, and the smaller room is her office. All of the rooms are arranged to capture plenty of natural daylight. The entire north side of the house is substantially bermed, further contributing to its low visual impact and to its ease of keeping comfortable.

Suzanne has managed to create a beautiful and functional home that is also quite compact and easy on the environment. Perhaps some of the ideas presented here can help simplify your life.