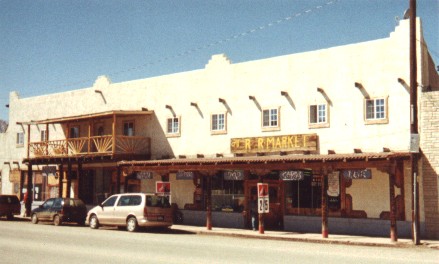 To find out what sorts of buildings have lasted for over a century, Rosana and I decided to visit the oldest continually inhabited town in Colorado: San Luis. Established in 1851 by Spanish immigrants on original Spanish Land Grants, San Luis continues to be the home of their descendents. It was a wonderful experience to just wander around the town and look at the mix of buildings. One short section of Main Street demonstrates the reverence for longevity. The Costilla County Courthouse, built in 1883, was originally made with thick adobe walls, and then added onto with cinder blocks and cast stone. The R&R Market, with the Don Carlos hotel above, was built in 1857, with two foot thick adobe walls. 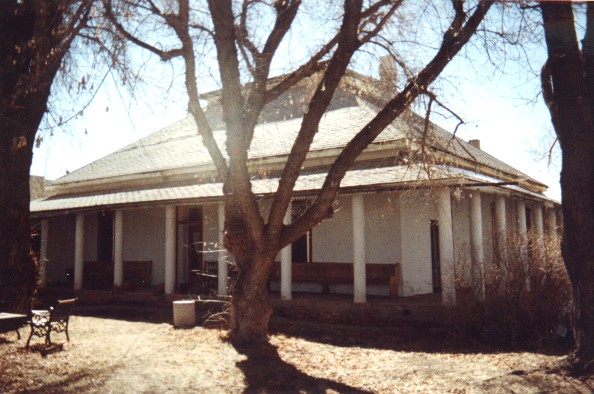 The most charming adobe building on Main Street, to my eye, is an old hotel, built in 1860. This now houses an art gallery run by Huberto Maestas, who created the marvelous series of bronze sculptures that embody the Stations of the Cross (more about this later). The hotel was built with a deep wrap-around porch, supported by a series of columns. I suspect that this porch has contributed to the longevity of the structure, since it keeps moisture away from the adobe walls. I asked if I could inspect the attic area to see how the roof was framed, and they were very accommodating. The rough sawn planks up there appeared as good as new; obviously care has been taken over the years to keep the roof in good shape, as I saw no water damage. 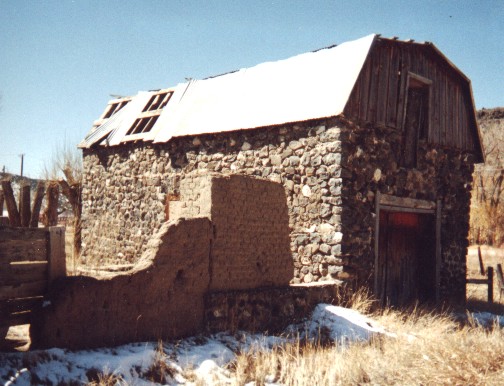 Near the center of San Luis we found an old rock barn, with the remnants of an adobe structure next to it. The accompanying photo shows how the various materials have held up over time. The barn itself is still standing, but neglect is taking its toll. The roof is falling apart, and eventually the wooden framework will rot away. The rock walls are as sturdy as ever, but a design flaw will eventually cause them to fail as well: there should have been a "bond beam" at the top of the wall to keep it rigidly intact at that level, so now large cracks have appeared and the whole back wall will topple within a few years. The remnants of the adobe wall are amazingly still intact, despite the obvious erosion from lack of weather protection. >

Within the heart of San Luis is a small mesa, called "La Mesa de la Piedad y de la Misericordia" (Hill of Pity and Mercy). A trail leading up the hill is punctuated by some 15 statues representing the Stations of the Cross. The journey up this hill would be an emotional experience for any person, regardless their religious persuasion. The nearly life-size sculptures document the last few hours of Jesus's life, in a very graphic and compassionate way. When one arrives at the top of the mesa, another wonderful experience awaits. La Capilla de Todos los Santos is a chapel of pleasingly eclectic design. I include a description here, not because it is old (it may be the newest building in San Luis), but because it was built to last. 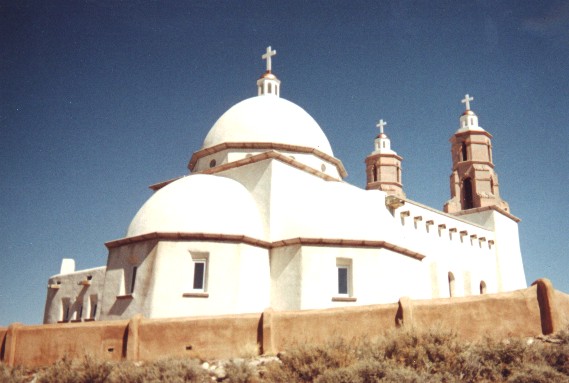 Completed in 1997, and designed by Arnie Valdez and Michael Bertin, La Capilla is made from stabilized adobe blocks, carved stone, and massive wooden vigas. The design derives from Mediterranean, Near Eastern and Pueblo architectural styles. There are two half domes, and one full dome, created entirely of adobe blocks. These domes are coated with a modern stucco material that contains latex polymers. I think that La Capilla represents an intelligent fusion of old and new, both in material and design components.

All of the buildings mentioned so far demonstrate a nearly total lack of consciousness about solar design. They do not make use of large areas of south-facing glass, and as far as I can tell, the adobe is not insulated from the outside atmosphere. It is true that two-foot walls of adobe will take quite awhile to heat up or cool down, depending on the season. However, eventually they will do so and then they will continue to rob the interior of a comfortable temperature, requiring considerable energy input to maintain comfort.

Over the years that I worked remodeling houses, I learned a few things about building to last. Here are some suggestions: 1) Do not mix wood and dirt. Inevitably the dirt wins! Termites and rot are extremely persistent. 2) Wherever possible choose materials that are not prone to rot. Water has a way of infiltrating the most clever of human design to avoid it, and moisture creates conditions for rot. 3) Allow things to breath as much as possible. Because of the previous consideration, this is important. If there is a crawl space under the house, make sure there is cross ventilation. If the wall doesn't need a moisture barrier, don't put one there. It is healthier for both you and your house. 4) Follow basic design concepts for structural integrity. There is a wealth of experience to draw on from all of the past building that has been done. Don't ignore it!