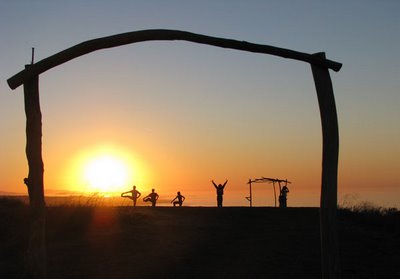 I attended the Natural Building Colloquium held this year at the Orella Ranch overlooking the Pacific Ocean near Santa Barbara, California, at the end of October. What a magnificent setting this was to spend a fine week of connecting with fellow enthusiasts of the natural building movement. About 70 attendees shared our insights, stories, passions, songs, poetry, cooking, concerns, and labor. I came away with gratitude for the opportunity to interact with such caring people, and with a renewed sense of confidence that we will manage to help forge a sustainable future.

This year's Colloquium was organized by the Natural Building Network ( www.naturalbuildingnetwork.org ) and was hosted by Gunner Tautrim, who represents the sixth generation of this family living on this land since 1866. The accommodations were primitive, with only a small kitchen as enclosed space; the rest of the facilities were rustic pit privies, temporary solar shower stalls, temporary bamboo and tarp meeting spaces, and a nice lawn area. We brought tents for sleeping. All of this was happening with the grandeur of the Pacific coast as a backdrop, and the elemental simplicity and beauty combined to create an appropriate mood for contemplating the benefits of building naturally. 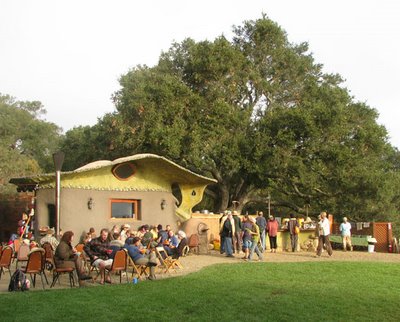 After breakfast each morning we would gather in a big circle on the lawn to review the various options for the rest of the day and share other thoughts. Typically the mornings were devoted to work on a sturdy, permanent, multi-stalled toilet facility that was already framed with wood. Gunner wanted the walls and a surrounding fence to be finished with natural materials, and there were many volunteers who formed teams to accomplish this. Mostly, split bamboo or recycled fencing was used for a framework, over which cob and clay finishes were applied. 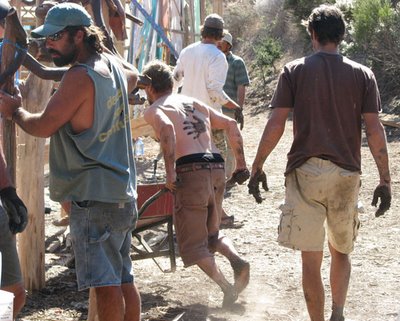 Lunchtime often featured tables where specific discussions would occur, having spontaneously been announced at the morning circle. The afternoons were reserved for many concurrent presentations or discussions, so there were always hard choices to make about what to attend. During the course of the week, over forty different topics were explored, in a variety of meeting places. These ranged from the use of materials (such as bamboo, cob, adobe, and lime) to more theoretical discussions about engineering, thermal properties, efficiency, and design. One of the most popular forums was about codes and ways of improving the acceptance of natural building techniques by building officials. I will be writing about this topic in more detail in a future blog post.

I shared one two-hour presentation about earthbag building around the world with a woman architect from Israel, who had brought plans for an earthbag residence that she was designing for a client there. First I talked about the history and development of this technique, and then profiled a number of projects that have been completed (see www.earthbagbuilding.com ). After this introduction, the architect laid her plans on a table and we all discussed specific questions that she had about them. This was a great way to learn some of the basics of earthbag building, and then apply these concepts to a specific situation. 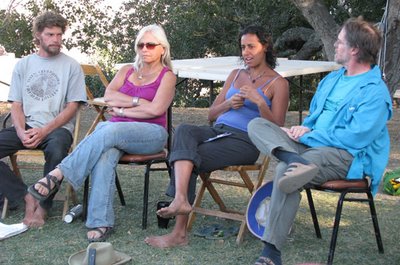 I was very pleased that a discussion was convened to explore the role that natural building can play in what was described as the "long emergency," or the compounded effects of climate change, peak oil and other resource depletion, population pressures, and financial crises. Without this discussion I would have felt that we were negligent in addressing these most pressing issues. I plan to write another entire blog post about this. After dinner (which was always delicious and usually vegetarian), we were treated to a variety of programs or entertainment that emanated from our group. Mostly these were slide or Power Point presentations, but one night was devoted to a talent show with lots of music and some stand-up comedy.great fun. I showed lots of pictures I took when in Jeddah, Saudi Arabia a couple of years ago where I had been invited to discuss sustainable architecture with the faculty and students at the King's University (see www.greenhomebuilding.com/weblog for my essay about the situation there) . 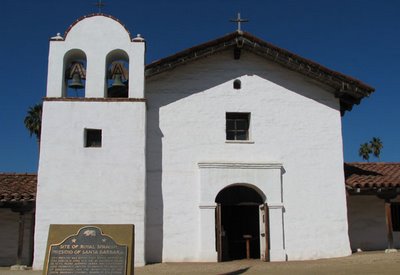 One morning, about half of us opted to attend a tour of historic adobe buildings in the heart of Santa Barbara. The earliest remnants date to the 1780's when Spain authorized the construction of a presidio and the Santa Barbara Mission. Much of this early adobe construction was toppled during subsequent earthquakes, but recent reconstruction, using stabilized adobes, has returned the area to its original presence. I chatted (in Spanish) with the Guatemalan and Mexican crew who were making new adobe blocks for further repair work. On the return trip to the Orella Ranch, several of us made a detour to the nearby beach to dip our feet in the ocean. One of the delights of this event was the participation of James from Zimbabwe, Africa. This very engaging fellow brought with him pictures of a lovely little thatched cob circular building that he and some friends had made. He also brought his large thumb piano to serenade us with African ballads. This was a reminder of the deep roots that natural building has from all corners of the world. 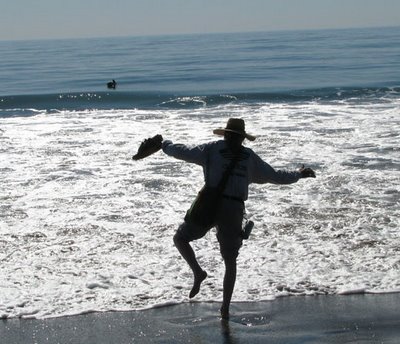 All together this week of camping out in this spectacular place and connecting with these dedicated and compassionate souls has left me feeling heartened that we will find ways to overcome the enormous obstacles that lay ahead.
On a very foggy night before we were to disperse the next morning, during our closing ceremony, we arranged ourselves in two large circles that faced each other. We (on the outer circle) were asked to assume the role of addressing our ancestors (on the inner circle) from some indefinite time in the future. When I did this I felt strangely like I was really speaking from the future. I told the young woman who was sitting across from me that I did not blame her for the difficulties that she and subsequent generations had endured. I said that the pattern was innocently established well before she was born. Industrialization was fashioned to improve life, not deteriorate it, and the consequences were not foreseen. And then I told her how much I appreciated the hard work she was doing to address and correct the mistakes of our ancestors. I said that because of the actions of her generation, we in the future were enjoying a simple and healthy life based on ecological balance, and that we owe her and many of her generation our gratitude for all that they did to make this possible. We then stood and embraced, the Future and the Present, for a moment of true compassion.

To see more of my pictures taken at this event go to flickr.com/photos/kellyhart .