I was invited to be a presenter at the Natural Building Colloquium, 2000 in Kingston, New Mexico, held at the historic Black Range Lodge. This five day event brought together over 100 people from around the country to discuss all aspects of natural building. "Colloquium" means talking together, and the first one in Oregon about five years ago was assembled to defuse a growing antipathy among various camps of natural builders. The success of this endeavor was quite evident as I merged with this group of people who have become a family over the years. To be in the midst of so many people who passionately care about a sustainable future and are demonstrating their feelings through their work was inspiring. Let me share with you a bit of that inspiration. 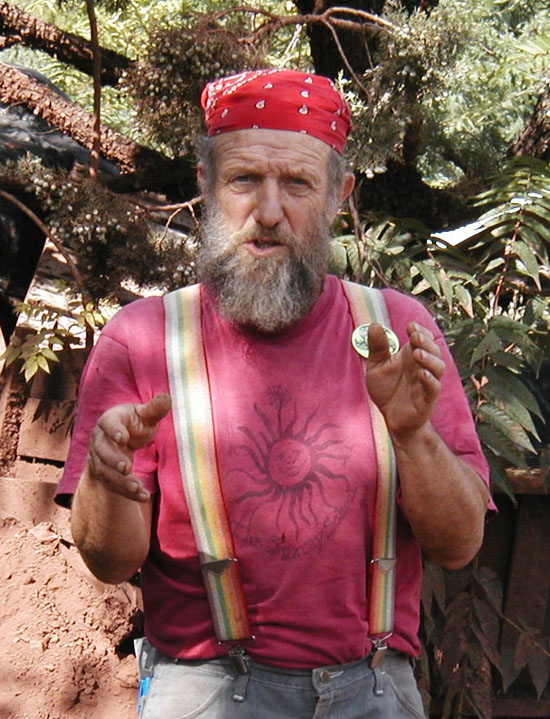 Ianto Evans and Linda Smiley founded Cob Cottage to promote the use of cob, a mix of clay, sand and straw that can be piled up to form walls. Cob has been used throughout Europe and the Middle East for centuries to build houses that last. Ianto has an incisive mind and a passion for educating people about the place of vernacular architecture in our modern culture. To experience Ianto's slide presentation is to be swept into a landscape of sensuous architectural forms, juxtaposed with jarring images of industrial reality.

Rob and Jaki Roy, of the Earthwood Building School in New York state, are equally passionate about their chosen method of building: cordwood masonry. Basically, cordwood utilizes small chunks of logs, with their ends sticking out and their sides mortared into a substantial wall that is both beautiful and insulating. It was fun to watch the two couples interact when they worked together on a "cobwood" experiment, combining the two techniques to form walls of log ends and glass bottles, using cob as mortar.

Sun Ray Kelly from Washington state looks like the archetypal hippie---bare feet, wild hair and wild eyes. He speaks poetry about living naturally. I joined a walk and talk with this charismatic man, following the creek that flows through part of the Black Range property. Later, I sat while he narrated a slide show of the architectural and sculptural work that he has done over the years. I expected to see small huts made of indigenous materials. What he showed were enormous mansions using huge curved portions of trees and massive banks of glass. When he used straw to build with, he brought in two-ton bales that were set into place with a crane!

Mark Lloyd Lakeman is an urban guerrilla from Portland, Oregon. He made a very eloquent and convincing presentation about how common humanity has been forced into a mould of subjugation by those in power since the time of the Roman Empire. The common grid pattern that defines most cities and slices the entire country into rectangular sections was conceived to divide and conquer. With straight sight-lines, an entire city could be kept under surveillance with just a few guards at key intersections. This mentality has persisted to the present. In older European communities, intersections tended to be meeting places, common ground, where people socialized and commerce occurred. Mark has spearheaded a movement in Portland called "City Repair", where neighborhoods are empowered to reclaim particular intersections for the good of the community. The intersections are painted with beautiful patterns and the area is provided with a simple shelter, perhaps a tea house where locals can sit with a cup of tea and talk. This is revolution. 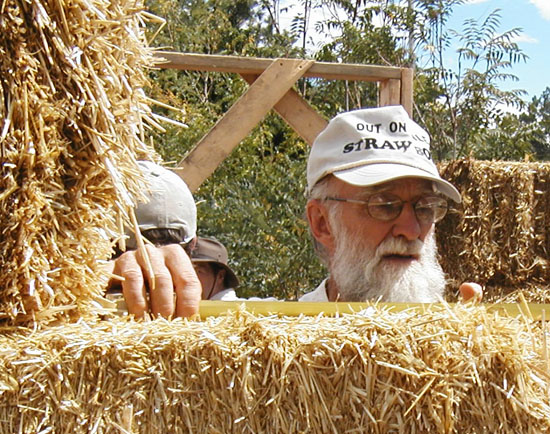 I met Matts Myhrman and Judy Knox and was immediately captivated by the sparkle in their eyes. Matts is an elder statesman in the straw bale movement, and the two of them have been travelling around the country interviewing people who have been living in straw bale homes. They will be compiling a book from their research . Matts showed slides of a straw bale retrofit of an existing concrete block house that they own in Tucson, Arizona. What a transformation took place as they wrapped the cold concrete with warm straw! 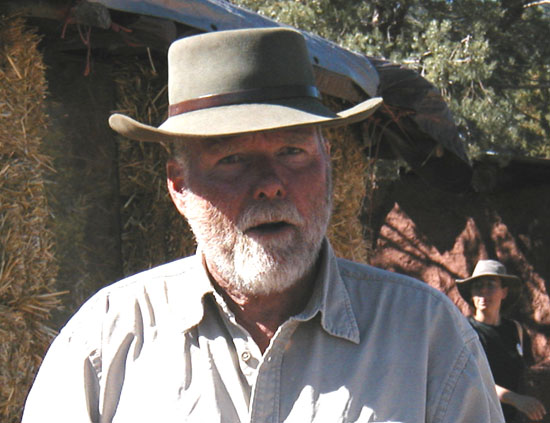 And then there is Tom Watson, a large, imposing man with a booming voice and an opinion about everything. Fortunately his opinions are backed by a considerable knowledge of hard science. Ask him about the chemistry of lime or portland cement, and you will get a detailed analysis of what happens during the curing process. Inventions that he is particularly proud of include pumicecrete, the Watson Wick gray water treatment and Night Sky refrigerators.

I wish I had space to describe all of the wonderful people and what they had to offer. Here are some of the other topics that were covered, either in a hands-on workshop form or as a presentation: topographic mapping and house siting, earthbag building techniques, straw clay and clay wattle, natural plasters, adobe floors, thatching, building with bamboo, vernacular architecture, small houses, sun-earth alignment, pre-Spanish adobe, house design and even sustainable transportation (solar car, bio-diesel, mass transit).

People were very appreciative about what I had to offer about my particular experiments with earthbags filled with scoria and covered with papercrete, as well as the solar vehicle. When I wasn't attending another presentation, I was probably showing somebody the "baby book" of the growth of our house.

This was a gathering of peers, where everyone had something to offer, and included people of all skill levels. When we all joined hands after the final meal, we breathed deeply, looked around at each other and appreciated the transformational power that we all represent. I will always feel connected with this new family, and think that many people would benefit from attending a colloquium.