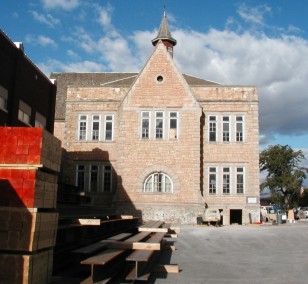 I find it hard to imagine a more ambitious project than lifting a large, two-story stone building, weighing some 1650 tons, onto wheels and moving it several blocks to a new location. The logistics, labor, expense, and vision necessary to accomplish such a feat are astounding. Yet this is precisely what happened recently in my home town of Preston, Idaho.

The Oneida Stake Academy was built in 1890 to house the educational needs of the little town of Preston and vicinity. Hewn from local sandstone blocks in a classic architectural style, this edifice was meant to last for centuries. Both of my parents attended school at the Academy, and several of my relatives taught there. It was one of the primary landmarks of Preston when I was growing up. But by then other high school buildings started to encroach on the old Academy, and it became an orphaned building that was seldom used. 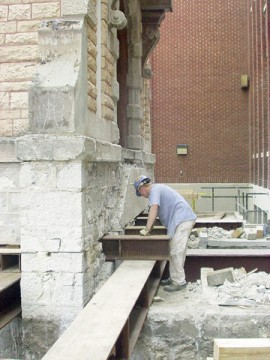 In fact, by the time I moved away from Preston, the Academy was facing a very uncertain future. Some considered it more of a liability than an asset for the community. There was talk of tearing it down. In the 1970's, my father, Newell Hart, decided to come to the rescue of the venerable old treasure. He organized a group called the "Friends of the Academy" which managed to raise enough money to do some needed restoration. He devoted several of his last years, almost single handedly, working on the project. Early on, he climbed the roof of the steep bell tower to re-shingle it, which created great publicity for the cause. He re-pointed much of the old stonework that was falling into decay, and refurbished the interior to its earlier charm, where modernization had placed lower ceilings and paint had covered old wood-grained panels.

For awhile renewed life emanated from the Academy, with displays of historical artifacts, lectures, reunions, and eventually my father's funeral occurring there. But the march of time and "progress" brought the future of the old building into question again. The High School needed further expansion, and it looked like the Academy was going to be torn down, despite the pleas of all of its friends. The old stone walls were literally being squeezed by newer brick facades flanking it. 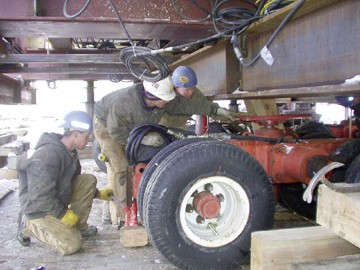 In desperation, a new group of loving locals, led by Necia Seamons, decided to mount one final attempt to save the Academy, but the clock was ticking and they would have to raise over one million dollars to do it! They found both an engineer and a moving company who were willing to take on the task, if they could raise the money. Amassing the funds to move and restore a relic building in the little town of Preston is as much of a feat as actually doing the job, but they somehow managed to do it!

Peter Friesen, an octogenarian who has engineered many really difficult moving jobs, such as the Cape Hatteras Lighthouse, was hired to oversee the project. This immigrant from the Ukraine has won several Guiness World Book of Records, included moving the heaviest building. He has moved some 5,000 buildings in his career and holds the patent on a unified hydraulic jacking system, used by most hefty projects of this sort. He also pioneered the three-zone placement of dollies which utilizes the principle of the tricycle to keep buildings in perfect balance as they creep to their new locations. 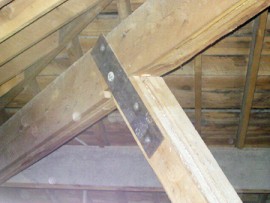 To actually perform the staggering work of moving the Academy, they hired Lindsay Moving & Rigging, from Washington State. This crew commenced work in September, 2003, and I was able to watch them in the early stages of their preparations while I was visiting my mother in Preston. At this point they were cutting holes through the stone walls of the basement with a large diamond-tipped saw in order to insert 16-ton steel beams as an undercarriage for the move. They were also using a pump to grout the rubble-filled walls for further stabilization. 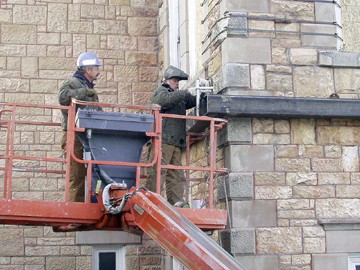 Other work was done to reinforce the old mortised wood roof structure with steel plates, strengthen the mortar work of the walls, cinch the second floor tight to help prevent swaying during the move, to brace the building with external whaling.

Once the steel was in place, the whole building was lifted nearly12 feet higher than it had been, using 31 hydraulic jacks, all operating in concert so that no undue stress was placed on the Academy. Over 14,000 pieces of wooden cribbing had to be arranged underneath, to support the building on 41 massive dollies, in preparation for the move.

As the time of the great move drew nearer, the new resting place of the Academy had to be prepared through excavation and preliminary foundation work. The final foundation would be poured after the building was in place to allow for exactness in forming up the walls. Once the foundation was set, the steel beams would be removed and the building winterized. 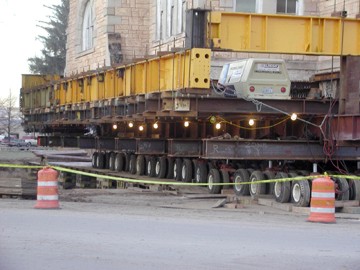 Nearly three months after work commenced, the Academy was ready to move. The high school was closed, and a crowd amassed in anticipation of the first forward movement. At the moment the tires began to roll, the crowd spontaneously cheered, and the operator of the hydraulic system mistook that sound for something awful. But it was actually rather smooth sailing after that, except for some bureaucratic boondoggles. Concern that the academy's tower would interrupt telephone service when it crossed a microwave beam and a missed notification to customers by the local power company of when the move would temporarily disconnect electricity, delayed progress for awhile.

The actual move took about four days of gradual creeping from its old moorings, out to the roadway, and over to the corner of the city park where it will remain in all of its glory for hopefully several more centuries. The process of setting it down on its new foundation is exactly the opposite of raising it, with all of the steel and cribbing being pulled out. 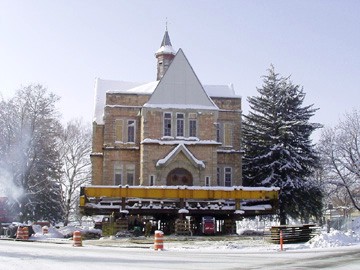 I know that my father would be very proud of all of the steadfast vision and work that enabled the old Academy to be carefully moved to an appropriate resting place. I am proud of the role that my father played in securing this wonderful historic monument for the admiration of posterity. My dad took on the mantle of being the preeminent historian for Cache Valley, in southern Idaho, and I think he will also be remembered as one of its greatest preservationists.

Anyone wishing to assist financially to finish the restoration process on the Academy (estimated at over two million dollars) can send tax-deductable donations to the Mormon Historic Sites Foundation-Oneida Stake Academy, P.O. Box 555, Preston, Idaho 83263. For more information, you can contact Necia Seamons at 208-852-1837. Incidentally, all of the images on this page, except for the first one, were taken by Necia Seamons.