For many years I have wondered about the effectiveness of various products that advertise that they can insulate roofs and walls by simply painting them! The technology is said to stem from the science (developed by NASA) of protecting space vehicles by coating them with tiny ceramic spheres that reflect heat, so that they don't burn up when re-entering the atmosphere. Some products consist of an additive for paint, while others are specially formulated paint.

When I realized that I wanted to insulate the 1940's adobe house I had bought, I began to wonder whether this might be a simple solution to accomplish this. In researching this possibility I discovered that there were conflicting opinions about whether such a paint could work. The manufacturers claimed that many tests have proven their effectiveness and there were some testimonials from individuals or businesses that made similar claims. But I couldn't find any independent studies that I considered actual validation of the concept.

Not being willing to proceed blindly with painting my entire house with expensive paint on the assumption that it would improve the thermal dynamics of my completely thermal mass walls, I decided to conduct an experiment that would accurately inform me exactly how effective the paint might be. I conceived of a situation that would simulate the thermal mass walls that were left open to the ambient atmosphere over several days. There would be one setup painted as prescribed with the insulating paint and then a second control setup that was identical, except without the insulating additive. Embedded within each of these would be a wireless thermometer probe to keep track of the separate interior temperatures. 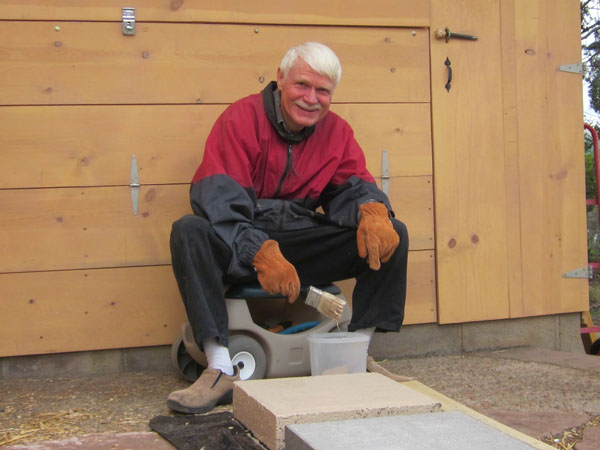 I found some perfectly uniform 16'X16"X3.5" concrete blocks for sale at my local building supply store quite cheaply, so I bought ten of these. Next I acquired the insulating additive (Insuladd was the brand name) and used some exterior latex paint that I already had on hand. I thoroughly mixed the additive to some of the paint and kept some of it in its original form for the control. Then I painted half of the concrete blocks with the insulating paint and half with the control paint, applying two coats of each. 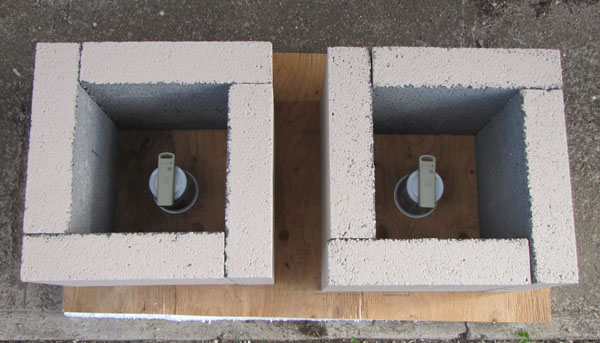 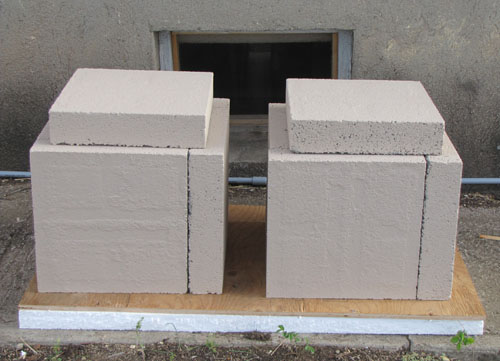 After the paint had cured, I first set up the experiment in the shade of the north side of my house. I arranged the painted blocks on top of a sheet of plywood that was insulated from the concrete sidewalk below with 2" of expanded polystyrene insulation. Suspended near the center of the cube, resting on some plastic tubs, were the thermometer probes. A cap of the same painted blocks was placed over this, sealing the interior from most air intrusion. Then I could easily monitor the temperatures of each cube from my office where the thermal readouts were located. 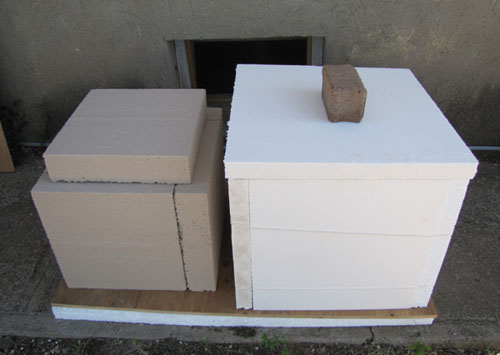 After a couple of days of collecting this data, I decided to repeat the experiment, but this time with the control being the same cube with non-insulating paint that was covered entirely with the 2" expanded polystyrene insulation. This I thought would give a good comparison of the insulating paint with a known R-value of common insulation (R-7.7). 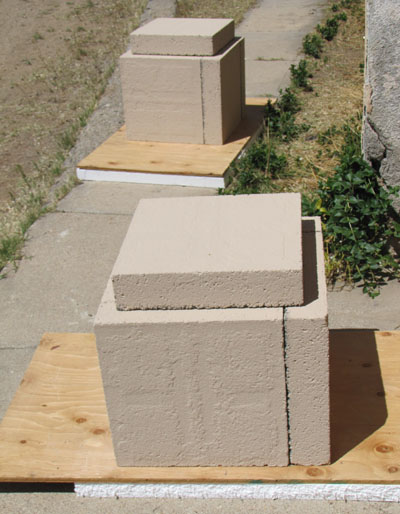 After I ran this experiment a couple more days, I decided to repeat the entire set of experiments in an open, sunny area on the south side of my house, just to see if direct sun might make a difference in the performance. 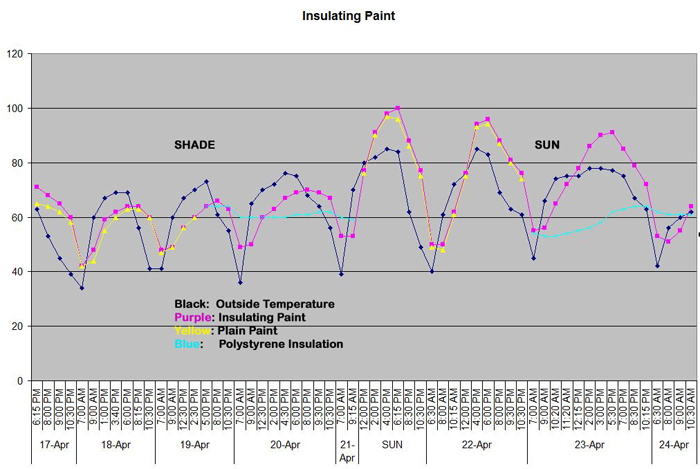 Finally, after about a week of collecting all of this data, I was ready to dismantle the experimental materials and graph the results of the experiment. It was obvious to me that, as I monitored the temperatures, that the insulating additive seemed to have little noticeable effect, I would say that the scientific results, as shown in the above graph, corroborate this. The day and time are indicated along the horizontal axis, and the temperatures (in Fahrenheit degrees) are shown on the vertical axis.

When you look at the yellow control, you can see that it nearly perfectly mirrored the data from the insulated paint box; in other words there was virtually no difference! But if you look at the blue line of the polystyrene insulation, you can see a marked difference: the line from this experiment was much flatter, showing very little variation in temperature over the entire week's experiment. In other words, the polystyrene was effectively insulating the cube from the ambient temperatures. I consider this rather conclusive proof that, at least in terms of insulating a thermal mass material like concrete, the insulating ceramic beads (at least the brand that I used) have no noticeable effect, whereas common polystyrene insulation has a considerable effect.