Digging In for Comfort

Think of all the animals who dig into the ground to find refuge, comfort, security. Their ancestors discovered millennia ago that the earth could provide all of that, free for the digging. We humans have done this too, at times, but we tend to forget the benefits, preferring to follow the trend of building on the surface.

What the animals know is that the earth can shelter them from the extremes of temperature, from the wind and sun and snow. If you dig several feet into the ground, you will discover that the temperature does not vary much there, year round. Water pipes are usually buried because they won't freeze when below frost level. In fact, the temperature five feet under the ground stays about the same year round. I'm sure you have experienced the delicious coolness of a basement room on a scorching summer day. Perhaps you've gone into that same basement in mid-winter and been surprised how warm it felt. This is the moderating effect of the earth at work.

Of course, most of us would not be comfortable in a house kept at 50 degrees, so we would need to bring the temperature up maybe 20 degrees to relax at home. Compare that 20 degree increase with say the 70 degree increase necessary to be comfortable in a conventional home when it's zero outside. It would take over three times as much energy to stay warm if you have not taken advantage of the earth for shelter. And on a hot day it works in the other direction, requiring tremendous air conditioning energy to stay cool enough, if you have not dug into the earth. 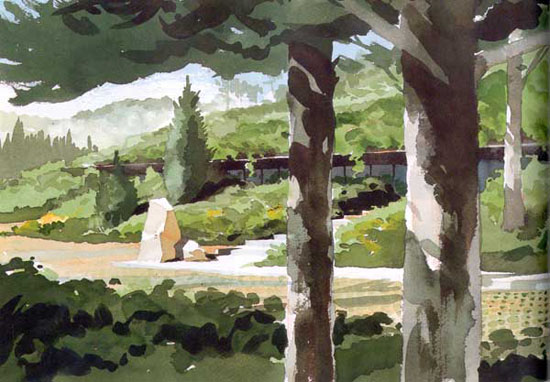 Many people think that an earth-sheltered house must be dark, dank, dirty and doubtful as a pleasant abode. They are wrong. There are many ways to introduce light, views, and an airy feeling into a bermed house. I'm not suggesting that we live in a hole in the ground, although even that can be pleasant if the hole is big enough to provide an atrium/central courtyard. More commonly, an earth-sheltered house is dug into a hillside, especially if that hillside faces more or less south. Then the windows for solar heating are naturally at ground level, and much of the rest of the house can be surrounded with earth. Of course, even on flat land, soil can be pushed up around the sides of the house to provide the berm.

In building an earth-sheltered house, it is important to pay attention to certain details. As with the rest of the house, the walls that are in contact with the earth need to be well insulated, or else the soil would continually suck the warmth out of the house. Also, these walls need to be strong enough to withstand the pressure of that earth and waterproof to keep out the moisture. Traditionally, reinforced concrete has been used to build subsurface walls, and this works well, but it is not the most environmentally friendly way to do it.

Mike Oeler, in his books on building underground, suggests using heavy timbers to frame the structure, with boards to form the walls, and then using plastic sheeting to waterproof it. He has lived in such a structure in Idaho for quite a few years and is still happily advocating this approach. 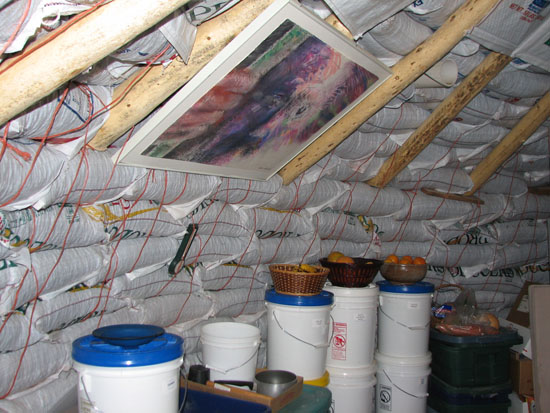 I have been experimenting with earthbag construction, much of which is underground. The polypropylene bags were filled with either sand or volcanic scoria. The lower bags that are filled with sand are insulated from the outside with scoria. I covered all of this with a double layer of 6 mil polyethylene before backfilling. Between each course of bags are two strands of four-point barbed wire. The wall itself has a convex curve set against the earth to withstand the pressure of the soil. The beauty of this is in the simplicity of construction and the fact that it uses very little industrial material.

I visited several other local houses that take advantage of the earth for shelter. Mark Jacobi and Christine Canaly started building their house 11 years ago, and originally lived in a nearly totally bermed room at the lowest level. This room was built with "Foam-form" blocks that were filled with rebar and cement, and then tarred on the outside and Q-bonded on the inside. Mark finds it very soothing to be in that room. The earth makes it snug and cozy and quiet. He also points out that digging in allows for a lower profile that is not as much of an intrusion on the landscape. And it saves fuel costs.

Alan London and Julie Kove are just moving into their passive solar house that has been two years in the making. Alan designed it with some suggestions from a solar design specialist. The house is basically set into a south-facing sand dune that was notched all the way through, so that the garage/entrance is on the north side. The exterior walls were formed with "Rastra blocks," which were filled with rebar and cement. A Bituthane coating was applied to the blocks below grade, and then blue-board insulation set in place before backfilling. This is one of the best passive solar designs I've seen. I'm sure they will be comfortable. 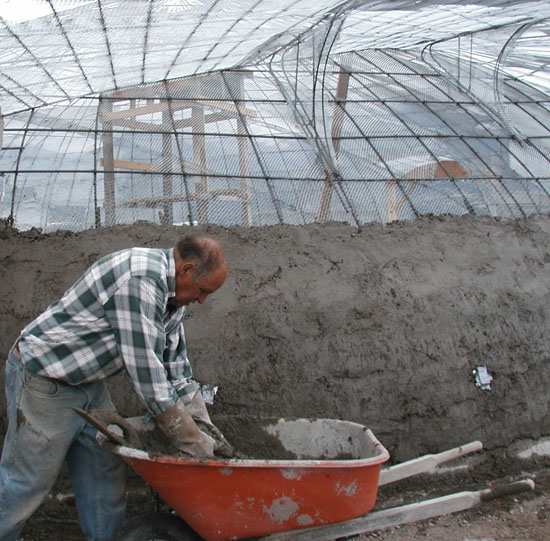 Bob Garber has been building his free-form, steel reinforced concrete house for the last few years. Working by himself, he hand-mixed all of the cement and applied it by hand to the framework. The result is a marvelous, serpentine design that was not premeditated. The passive solar aspect has been working so well that without additional heat the temperature did not drop below 60 degrees F. last winter. He hired a crew to insulate the exterior of the building with about three inches of urethane foam. Over the foam is a coating of "Elray stucco" that has been painted with a zig-zag pattern. The north side of the house is substantially bermed, so much so that he says the deer walk right up on the roof.

All of these people have happily dug into the earth for shelter. They know what the wild animals know: Mother Earth provides for our needs.