A recent trip into New Mexico and Mexico has brought me closer to imagining the lives of the ancient ones who once occupied Chaco Canyon and Paquime. What remains of the massive structures that once housed these people is awesome, a testament to their skill as planners and builders. 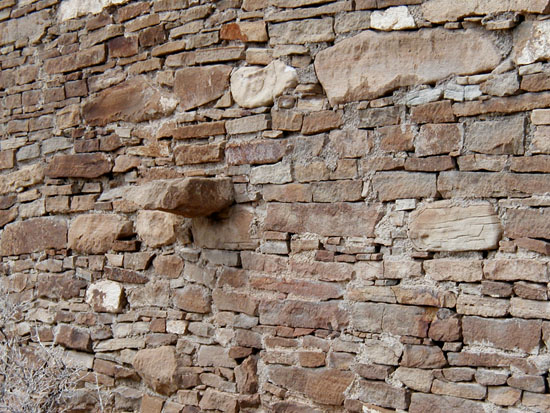 The Ancestral Puebloans were especially adept at creating lasting structures, as the ruins have withstood climatic forces for a whole millennium. They built with carefully shaped stones, fitted together with adobe mortar. The walls were laid with great precision, so that the outer surfaces present a smooth face. The patterns of laying the stones are a delight for the eye, with clusters of small stones layered with bands of larger ones.

Some of the structures were four stories high, which required some sophisticated engineering. The walls at the base of such high buildings were about three feet thick, diminishing in thickness with each successive story. Ceilings and floors were created with hefty logs set into the stonework, then crossed with smaller diameter logs, then bark and adobe laid over these to make a finished floor or roof. Most of the wood for this was cut with stone tools and hauled about 35 miles from the nearest forests. Parts of the log supports are still intact.

Some the larger buildings might have housed over a thousand people, but this is disputed by some archaeologists who claim that the absence of fire pits in all but the main floor indicate that only these were actually residences. I think that this logic might be misguided since the heat from the ground floor spaces would filter up through the ceiling into the rooms above, providing a kind of radiant floor heating for the upper rooms.

It is certain that these folks had evolved a highly cooperative society, or they wouldn't and couldn't have built such communal dwellings. It seems possible to me that the ground floor rooms with the fire pits also served as communal kitchens, where the inhabitants shared cooking and eating. This cooperative approach to living can be found in many intentional communities and co-housing projects today. 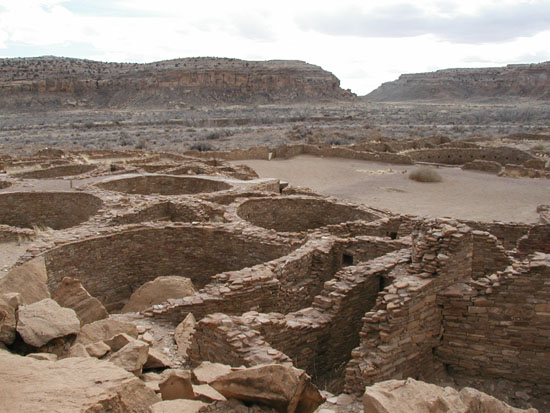 The use of the great circular kivas, some of which measured nearly 60 feet in diameter and were three stories high, is another indication of the cohesive society that prevailed. One obvious function of these kivas was to serve the spiritual and ceremonial life of the community, much as they serve the modern Puebloan people.

Another aspect of Chaco Canyon development that indicates how cooperative the people were can be found in the extensive series of dams and canals that were built to collect and channel water to their fields. Average annual rainfall in this area was, and is, less that ten inches a year. Without this sophisticated system of managing the runoff from summer rains, it would have been impossible to support much of a population.

Perhaps the most surprising feature of the Chacoan culture is the network of roads emanating outward from Chaco Canyon . These were not mere trails leading to outlying areas; they were veritable highways, some thirty feet wide, that were carefully constructed in perfectly straight rays. In some cases hills were cut through, and in other cases wide steps were created to climb over obstacles. These causeways measured up to fifty miles, connecting to outpost developments. Over 400 miles of such roads have been identified, even after all these years. Nobody really knows why such grand avenues were built; they would have served to speed the transport of goods, but this reason alone would probably not have been sufficient to warrant the enormous amount of work in creating them. It is likely that the roads also had some spiritual or ceremonial significance.

Along with the roads were line-of-sight signal stations that allowed the people to communicate at great speed, either with fires at night, or with sun reflecting surfaces. The Ancestral Puebloans had created an infrastructure that in sophistication rivals much of what we have today.

Trade goods from the North American coasts and from Mesoamerica were found at Chaco Canyon . Such items as shells, copper bells and exotic feathers were traded, perhaps for turquoise jewelry made locally. One of the regions they traded with was almost certainly Paquime in Mexico . This community (also known as Casas Grandes) is located in the State of Chihuahua , about 150 miles south of the border, near the small city of Nuevo Casas Grandes.

Excavations since the 1950's at Paquime have revealed similar multi-leveled co-housing. Lacking good stones for building, these people piled adobe to make walls, achieving impressive architecture in this fashion. Since adobe is not as durable as stone, these buildings crumbled away and would have been lost forever, had they not buried themselves in their own debris. When excavated, the original walls have many stories to tell about how the people lived. Unfortunately, the excavated ruins are now eroding and may soon be lost if continuing upkeep isn't carried out.

The people at Paquime were master potters, creating strikingly decorated ceramics. The traditional potting methods and motifs have been re-created and amplified by people living in the nearby village of Mata Ortiz . Several hundred craftspeople now make their living by fashioning what has become a fine art, often sold in the U. S. as Casas Grandes ware. As with the modern day Pueblo people, many of the ancient crafts and ways of living continue from long ago. 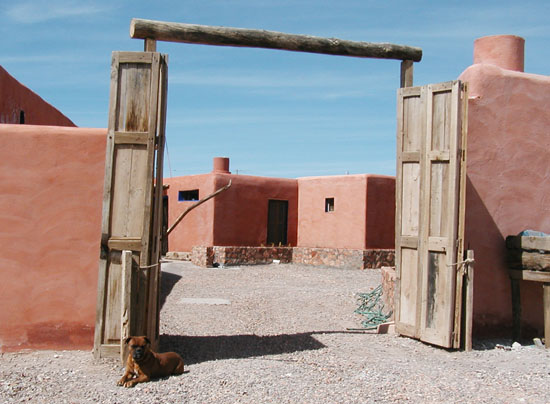 Across the street form the Paquime ruins, Rosana and I stayed at Las Guacamayas, a bed and breakfast and ceramic art gallery designed and run by Mayte Lujan. She built this using the ancient methods of ramming earth to form two-foot thick walls. Mayte was curator of the Paquime museum for awhile and truly appreciates the traditions being carried forward.